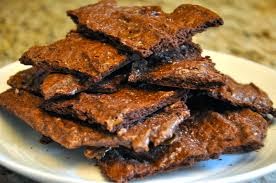 I take my  job as Homemaker seriously and like being in the kitchen!  So when I fail or get a negative comment from the Hubs it's hard to blow it off.  But I had one failure turned into a success this week AND an impromptu dinner menu that turned out great!  Exciting!

I tried making Brownie Brittle from a pinterest recipe that used a brownie mix...and it was a fail.  I think I didn't spread the batter thin enough.  It tasted good, but you could've broken a tooth on that stuff!  The second day I decided I was going to throw it in the garbage, then I had a bright idea - if banana pudding can make vanilla wafers soft, then maybe the same thing would work with a chocolate trifle!  We had college kids over Tuesday, and I usually make two desserts, so for one I made a chocolate trifle layered with chocolate pudding, brownie brittle, and Cool Whip.  I refrigerated it for about 6 hours and it was great!  The brownie brittle softened up and was a hit!

I didn't plan very well this week and just bought food for the college kid dinner when I went to the store earlier this week, so come Thursday I didn't have anything really in mind for dinner.  I know some of you will cringe at this, but I looked in the freezer and saw that my son had bought a box of Delimex chicken taquitos.  I used to serve taquitos pretty regularly, but haven't in the past couple of years.  I would line them in a 13 x 9 pan, cover them with cream of chicken soup and cheese.  The kids loved them!  Nowadays I rarely use cream of anything in casseroles.  I rarely make casseroles, actually!  Which I guess is better for us health-wise.

Anyway, I didn't have the soup, so I got out my recipe for Spanish rice which is really delicious with sautéed bell pepper and onion.  After simmering that, I put it in a square pan and nestled the frozen taquitos in the rice, topped it with cheese, and baked it.  Another success!  Add to it the avocados I had bought and we had some homemade guacamole with it.  The family was happy and I was pretty excited that I have found a yummier and slightly healthier way to serve taquitos!

That's sounds great! My kids like taquitos, too. I'm sure the kids loved them! I'm glad the failure turned out :). I would like your Spanish rice recipe. The few we've tried weren't that great. We like the Lipton Rice & Sauce, so always opt for that way.