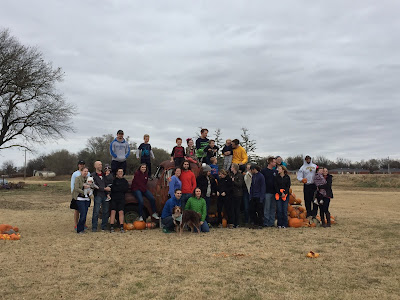 When a family with six kids matures, there's no way all the grandkids, spouses, and great-grands can all be somewhere at the same time.  But we had 58 this year at Thanksgiving, which is a great number.  At the request of Grandmother, made long ago in the 1980's, Thanksgiving would be her thing and she didn't care when any other holiday happened.  So most try really hard to be at Thanksgiving.  That request has turned out pretty well.

What also makes it special is that over the years, we've made some fine traditions.  Wednesday night is the All-Church Singing, each song led by a different person in the audience.  This year the youngest songleader was 4 years old!  Wednesday night singing is followed by delicious party foods and games at Grandmother's house.  Thanksgiving morning is the Turkey Trot, a run down the road to the cemetery and back (about a 5 K).  There is an actual trophy!  After the Thanksgiving meal and some relaxing, we head two blocks away to another relative's house to do the Pumpkin Bash! It's kind of like pumpkin baseball, only messier.  :0  Afterwards, lots of dominoes and card games go throughout the night.  The children are entranced with all the wonderful old toys that Grandmother has and just seem to roll with the crazy schedule of the day. 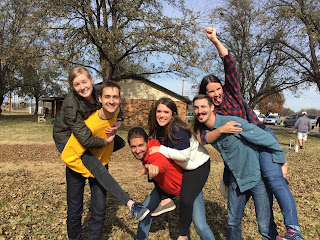 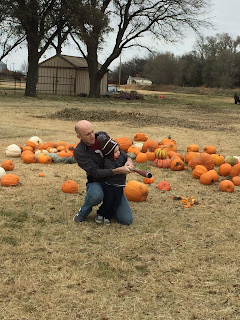 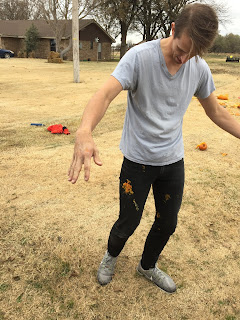 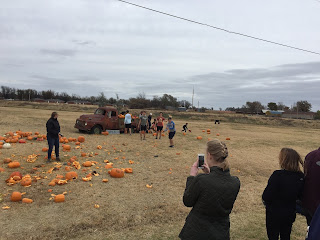 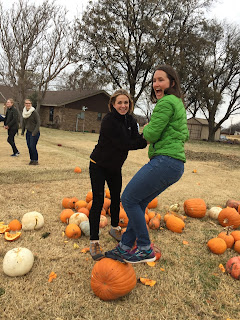 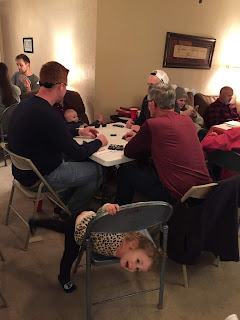 I've been reading a book called The Power of Moments, by Chip and Dan Heath.  Thanks, Sugarhill for the recommendation.  I realized our Thanksgiving is a great example of creating defining moments for many in our family.

So thankful for Christian family and the desire to keep family commitments strong!  Read the book and look for ways  you can do this if you don't have it right now.  Future generations will thank you!
Posted by Wa Wa Waughs at 6:08 AM No comments: 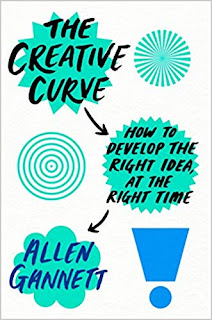 The Creative Curve by Allen Gannett

This book dispels the myth that creative people are born that way.  The author shows evidence of the creative genius behind many of our creative heroes and shows what hours of consumption and hard work do for a person's creativity.  He talks to our like of novelty and the familiar and how that plays into success.  Collaborating with others is a big part of artists creativity, also, which I loved!  We all need each other.  I enjoyed learning more about the founder of Netflix and how this model worked to his success.  Creativity is something we can all achieve, if desired! 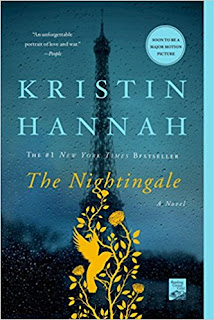 The Nightingale by Kristin Hannah

I loved this fictional story about a family in France during WWII!  Isabelle is a saucy young lady that refuses to let the Germans take over her country.  She secretly helps downed airmen escape over the Pyrenees to get to Spain and go home, so they can drop more bombs on the enemy.  Along the way, she learns the truth about her father and sister and finds true love.  An incredible story of the terrors of war from the perspective of the ones being invaded.  This best seller is being made into a movie! 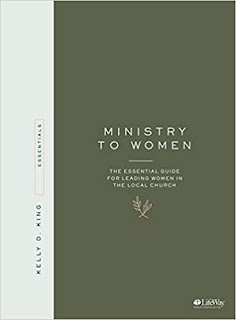 Ministry to Women by Kelly King

This is an essential guide for leading women in the local church.  It starts at the very beginning of a ministry effort, noting purpose, building a team, and including a lot of the nuts and bolts of a ministry. It is also a workbook, encouraging the reader to write down responses as you think through many different aspects of building a successful program.  Most of this is not new to me, but I would highly recommend it to anyone starting something from scratch, or for someone trying to build a well-rounded ministry to women!  I enjoyed reading this as I taught school many years ago with the author's mother!
Posted by Wa Wa Waughs at 9:36 AM No comments:

Do you wear clothing with a message?  I don't ordinarily, but I've been given a few shirts through the years with messages on them. 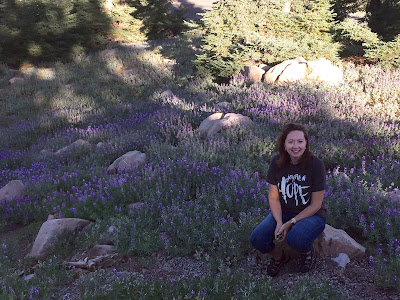 When I saw myself in this picture, I was a little taken aback.  I thought, am I really joyful in hope?  It also made me think about what others think when they see me.  Do I look joyful?  Hopeful?  Do my actions portray that?  I certainly don't want to be like that car in front of you with a Jesus bumper sticker that doesn't obey the rules of the road.  This also reminded me of the time when WWJD bracelets were popular.  I would occasionally look down at my wrist and be reminded of Jesus, which is a great thing!

As Christians we "wear Christ" every day of our lives!  I hope we portray it even if our clothes and accessories don't say it.

For those of you who were baptized into Christ have been clothed with Christ. Galatians 3:27 (CSB)

FUN FACTS FROM MY SON'S WEDDING...

The wedding pictures are in and it's been fun re-living the event!  Here's the things that were interesting to me about it - besides the fact that it was many miles away from Oklahoma:

THE WEDDING VENUE was actually the bride's Uncle Bill and Aunt Barb's farm in Ridgefield, Washington.  (I told most people it was in Portland, Oregon, since that's where the bride was from. Ridgefield is just over the Columbia River from Portland) They have had several weddings here and so they already had so many things prepared for the event.  It was nice to not be on a strict timetable like you are with regular venues! 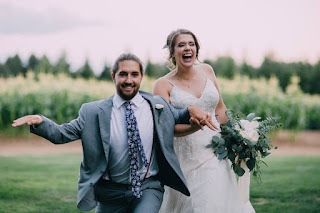 THE BRIDE'S DRESS was bought in OKC at one of my favorite consignment stores!

THE BRIDESMAIDS were from 3 different states and 1 different country! 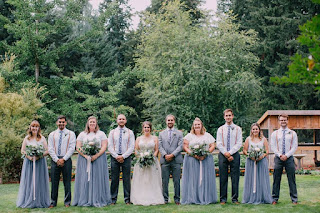 THE BEST MAN'S SHIRT was bought literally 2 hours before picture taking the day of the wedding!   He thought the shirt he had brought was fine and the groom nixed it, so we were left to call The Men's Wearhouse and stop by on the way to the wedding venue and pick it up!  Crazy kids! 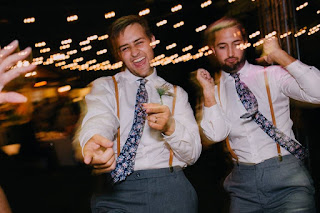 THE MASSIVE TREE for the ceremony is an old Maple tree.  Would you believe the entire group, guests and all, fit under it's canopy?  I love trees and nature and it had to be one of the most lovely settings I've ever seen for a wedding.  Uncle Bill had everything groomed so nicely in the yard! 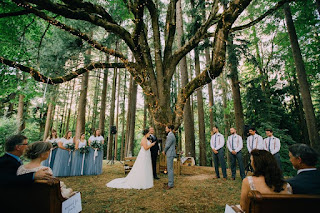 THE MOTHER/SON DANCE was a little sweet and a little silly with some of two songs.  My son wanted something that was sentimental (cheesy) and chose "You'll Be In My Heart."  I wanted "Happy Dance!"  We had a lot of fun even though we weren't in sync most of the Happy Dance song!  Another thing:  I'm not really much of a dancer - but going to aerobic exercise classes has made me confident enough to enjoy having some fun with wedding dancing. 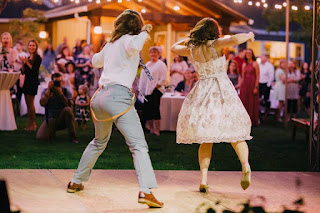 THE GETAWAY CAR was a surprise gift to him from his bride.  He loves cars and enjoys tinkering on them, buying and selling, and especially driving them!  She asked a cousin of hers who owns a  1968 Chevy Nova, fully restored, if they could leave the wedding in his car.  He said he would be their driver.  :)  So they got to leave in a fun fashion. 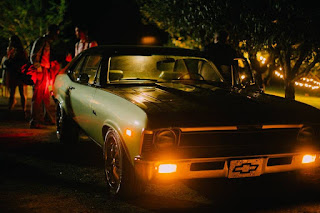 OUR FAMILY AND FRIENDS who made the long journey to come to the wedding!  There were friends from California, Tennessee, Tulsa, and OKC.  There were family from all over Oklahoma who came too.  It was great, and it's a humbling feeling to think they would do that for you! 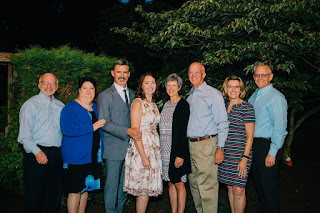 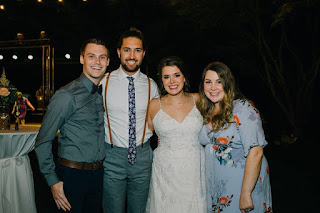 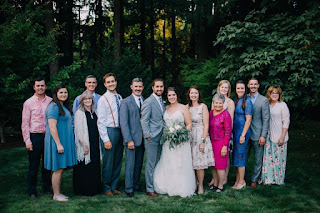