We just had our Family Mystery Night where we take the kids somewhere for the evening!  All they know about it beforehand is a couple of clues about what to wear...usually it involves dinner and an activity.  One time we actually did an overnight stay in a state park. This fun thing started out as a December gift, doing some of the fun holiday activities around town, but as the kids got older and got married and have more complicated schedules, we now look at dates in January or February.  WE MUST ADAPT.  :) 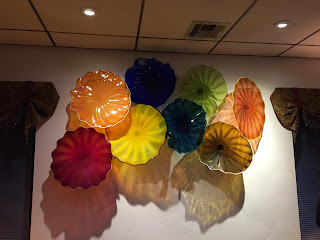 This time we went to a Glass blowing studio!  The man who runs it also used to have a restaurant, so we were there to eat and get a glass blowing demonstration (this was a package we bid on and won from a benefit auction).  We had such a great time!  Their home is the front of the studio, and they welcomed us in and encouraged us to look around at all the glass in their home.  Most of it was their work, but some in cases were gifts from other glass blowers around the country they admire.  They had made four pizzas, salad, garlic bread and a dessert tray for us. While we waited for the pizzas to bake one helper showed us the equipment used for glass blowing. 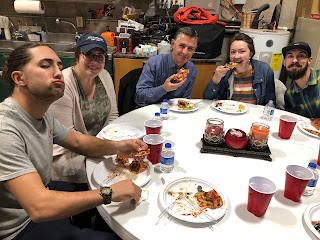 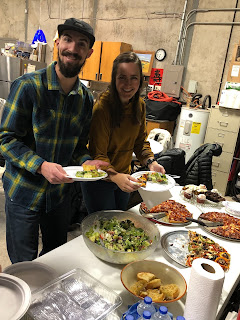 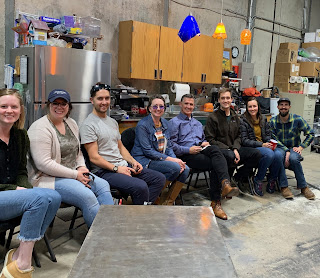 The food was delicious!  Then the real show began.  They began to make a 36" vase with multiple colors and a thin gold wrap.  It started off with one small blob of glass, that they added to three times.  He had his playlist of music going and we thoroughly enjoyed his 70's tunes.  At one point they let our SIL try holding the bar to see how heavy it was, and another time asked me to shape the vase with hot mitts.  He kept telling me to push harder, and flames erupted!  It was a lot of fun.  The owner also reminded us several times about the allegories of glass making and how it resembles the life of a Christian and how God shapes us. 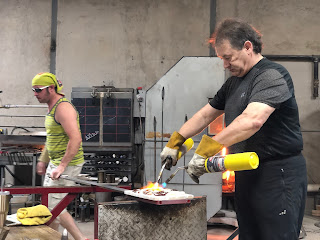 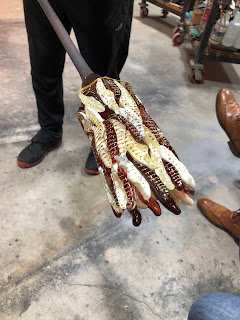 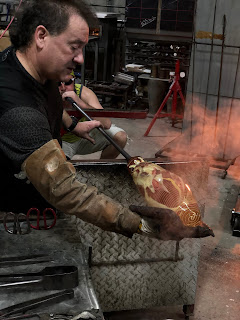 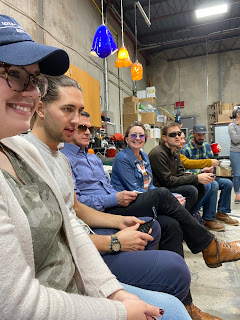 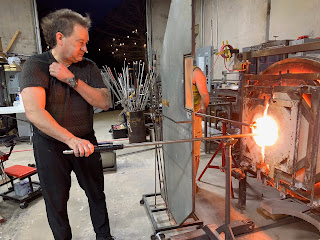 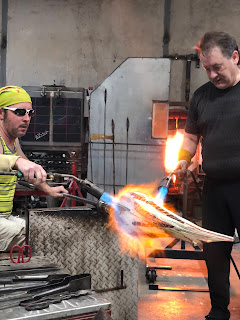 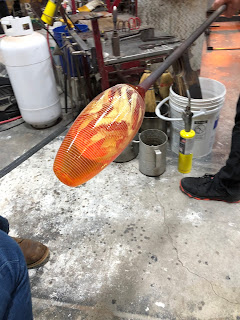 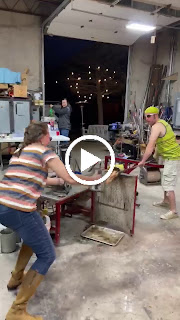 We were there for 3 hours - it was a long process, but really interesting.  I think it made us all appreciate beautiful glass more.  For me it was just perfect being with all our kids and doing something new together, without rushing or worrying about time.

This year, as part of my morning ritual,  I plan to continue what I did last year, writing scripture each day in a planner, to help memorize and "write it on my heart."  I write the same scripture for a week.  This time instead of picking 52 scriptures ahead of time, I decided to let the Bible app choose for me.  I wake up on Monday morning and look forward to seeing what the verse will be.  I use their "Verse of the day" feature.  It's been fun and I enjoy the surprise! 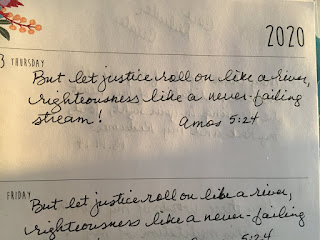 Last week was a verse from Amos about justice.  I ended up reading the whole chapter and thinking more about this (mostly sad) book. Some of these obscure scriptures are worth a second and third look.  It's a good exercise to make me think about God's story and my place in it.   I'm looking forward to seeing what else the Lord has in store for me!
Posted by Robin Waugh at 6:17 AM No comments:

I heard this quote recently on a Christian radio station and it really resonated with me.  There have been times I've thought so much about something (obsessed?) that I throw myself off balance.  I can easily dive into a project with vigor, only to be "overcome with overwhelm."  A friend of mine and I discussed this recently and she reminded me of another great phrase to describe it - "analysis paralysis."

Do you overthink things?  Do you concentrate on the smallest details and miss the forest for the trees?  Sometimes I do.  True confessions time, for all three of you who look at my blog.  :) Event planning and trip planning are two of the things where I've stumbled before.  I enjoy it so much, but sometimes it makes me crazy.  Not letting anyone else help with the project because you think you know best, you've done the research.  So much thinking and planning then when it doesn't go perfectly or you miss something you then get extreme disappointment.  I've done so much trip research before that I've gotten angry at The Hubs for suggesting any little change.  Now I relax and actually enjoy life more, having options that are flexible.  I see it in the way I approach my goals and new year's resolutions.  I just think too much about it then become paralyzed in knowing just which way to go and if I let it, I'll become discouraged and overwhelmed and do nothing.  Or it just takes me a long time to get to a conclusion.  Which is where my mind's been lately.
Havilah Cunnington is a Christian leader I follow on social media.  Although we don't agree on every detail of Christianity, I recently tuned in to her "I Do Hard Things" Bible study.  She reminded us of the man at the pool of Bethesda.


John 5:  Some time later, Jesus went up to Jerusalem for one of the Jewish festivals.2 Now there is in Jerusalem near the Sheep Gate a pool, which in Aramaic is called Bethesda and which is surrounded by five covered colonnades. 3 Here a great number of disabled people used to lie—the blind, the lame, the paralyzed. [4] 5 One who was there had been an invalid for thirty-eight years. 6 When Jesus saw him lying there and learned that he had been in this condition for a long time, he asked him, “Do you want to get well?”

7 “Sir,” the invalid replied, “I have no one to help me into the pool when the water is stirred. While I am trying to get in, someone else goes down ahead of me.”
8 Then Jesus said to him, “Get up! Pick up your mat and walk.” 9 At once the man was cured; he picked up his mat and walked.
He had been there for 38 years, and his response to Jesus when asked if he wanted to get well was that of a victim.  He had had physical limitations and emotional ones, I believe, as well, to not ever have made it into the pool for healing in all those years.  We do not have to be overwhelmed like he was!  The victim mentality will not serve us well.  Jesus gave him 3 Action Steps:  Get up, pick up your mat, and walk!  God met him in his action and HE WILL MEET US ALSO as we take steps to get better.

Where do we need to partner with the Holy Spirit to be better?  Don't overthink it.  Don't analyze it to the point of frenzy.  JUST TAKE ACTION, TAKE A STEP.  Rachel and Dave Hollis are popular podcasters that I also enjoy. Rachel empowers people with her story of overcoming a difficult childhood, hard work, and having a successful business despite not having a college degree.  The couple openly talks about marriage difficulties and striving to be better.  As far as her business is concerned, she advocates just taking steps.  You don't have to have it all planned out!  Just start moving in the right direction.  She is an inspiration to me in taking off with an idea and making it happen.  I've never been much of a risk taker but she helps me move in small ways.

Not sure where all of this was going but just felt like writing today.  May your goals be in sight and you not be overwhelmed with overthinking.

REFLECTING ON MY GOOD THROUGH MY WRITING IN A PLANNER...

Towards the end of the year I begin thinking about goals for the next.  I usually give it some thought for several weeks and don't always start my "New Year's resolutions" on January 1.  I know myself well enough to know that if I try to do that I will fail.  There's leftovers in the fridge and pantry, still some chill time left before the world gets going again, and I take full advantage of all of that.  So I always plan on evaluating and regrouping to get started on a new goal mid-January.

That said, I had been thinking about how life was going, and the 10 extra lbs. I now had, and the way my fitness level had gone down.  I started thinking about the things I hadn't done in 2019.


At that moment,  I was feeling especially disappointed in myself. 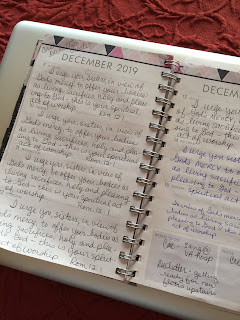 Then, I started flipping through my Daily Scripture and Goal Book (it's a humble weekly planner) that I did this year.  Part of my goal for 2019 was to write scripture each day, selecting a new one to focus on each week, to help me memorize and "write it on my heart." I loved starting my day this way.  I also had selected three goals to work on, writing them each week and noting progress.  Rise podcaster Rachel Hollis repeatedly says to write your goals as if they have already happened, and that was my way of doing it.  So each day I thought about how I was doing with my three goals, CARE, DECLUTTER, CREATE.  I jotted down each week things I did to meet those goals.

What I discovered as I flipped through my year in this book, was there were a lot of ways I showed CARE for people.  There were multiple weeks that I worked on DECLUTTERING in some way, and also lots of CREATING going on, whether something small or big.  Most of these things I couldn't remember until I saw the writing on the page.

I realized how I now had a new "tool" to help me when I'm feeling disappointed.  I can look at encouraging scriptures and see things I did to get closer to my goals.  Satan loves for me to get hung up on ways I've failed, but this little book is a great reminder of God's words and success! I can see it in black and white.

That said, maybe my new resolution should be remembering I'm loved, redeemed and headed to Heaven, no matter what personal goals I meet or don't meet.  :)