You might not think there's much there besides construction and traffic if you've been there lately, but I did discover a few things new to me while there with The Hubs on business! 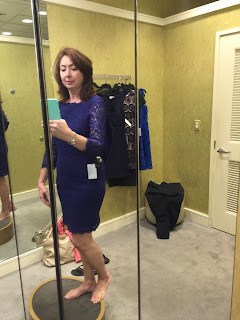 I shopped for my MOG dress at Dallas Northpark for two days at the four big department stores and ended up finding a Kate Spade dress at Clothes Circuit!  Clothes Circuit is an upscale resale shop I found online.  (Now forget I ever said I got a used dress when you see the wedding pics) 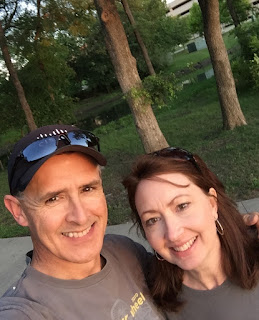 We discovered a walking trail by our hotel, Galatyn Woodland Preserve, and little did we know it connected to the Richardson trails.  It was green and beautiful and a welcome quiet spot in the middle of the city!  We walked it two different days. 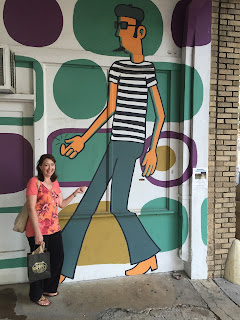 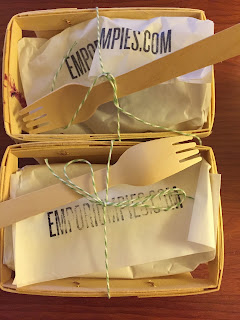 Pinterest directed me to the Bishop Arts District, so we went there for dinner one night.  It's an area south of downtown Dallas that has lots of shops and restaurants.  We ate burgers at a 50's style diner, Hunky's Hamburgers, and got pie to go at Emporium.  Some cute murals and a small downtown feel. I guess it was worth fighting the traffic... :) 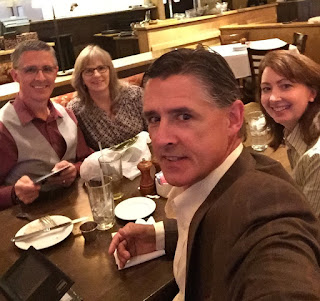 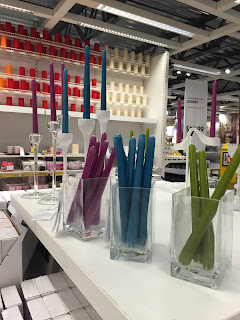 We also got to eat dinner with some of our family that lives there, and of course, the obligatory stop at IKEA!

I guess I should never sneer even at a little trip away from home with The Hubs!  It was great since we drove our own car and I just dropped him off for work each day!  Thankful...

ONE OF MY FAVORITE DAYS...

For the past 16 years in OKC, the Memorial Marathon day has become the favorite of a lot of Oklahomans!  For our family, too!  The Hubs has run in some form for 15 of them and the rest of our family in some way has joined in for the last 8-10 years.  We love it.  We bond together by getting up at 4:30 a.m. and driving in the dark to get a good parking space for the 6:30 a.m. start.  We enjoy gathering with fellow Christians in a building downtown where we can visit, use the facilities and pray before heading for the starting line at 5:50 a.m.  The whole atmosphere is energy filled, and it's fun to be a part of it. 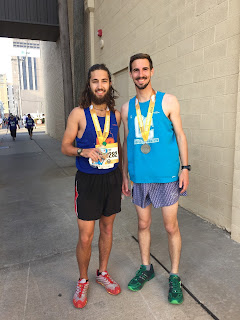 This year our youngest surprised us by finishing the half-marathon in 1:44!  Our son-in-law was right behind him at 1:45!  The rest of us didn't train much so we ran the 5K and I can say there's not the level of excitement that you get on the regular marathon course but I'm still glad we participated. 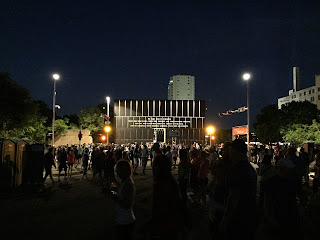 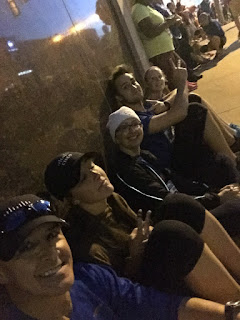 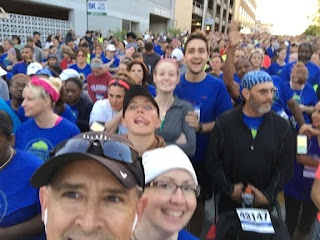 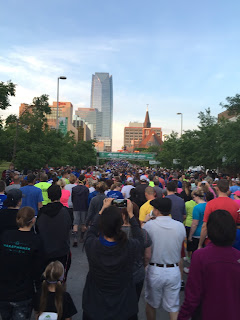 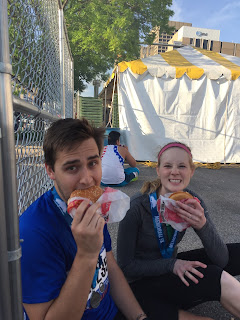 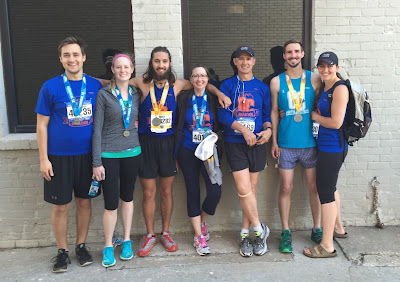 This is one of the few times during the year that we all eat breakfast together.  So it's pretty special to me!  We also take communion together since we missed church.  Then, finally, REST.

WHAT GOES WITH CHICKEN POT PIE... 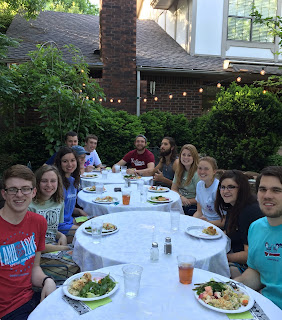 Well, I didn't realize what an issue it was until I googled it.  Apparently there's a lot of thought on the subject.  Who knew?  There were many conflicting opinions, ranging from it doesn't need anything but  a green salad with it to serve it with rice.  Rice?  I agree that Chicken Pot Pie covers all the food groups but when I have a group to feed I definitely feel the need to serve more than a one dish meal.

For this group, I made two different styles of Chicken Pot Pie, one with the biscuit topping and then one with pie crust.  Alongside it I had spinach salad, fruit salad, and roasted asparagus.  Chocolate four layer dessert finished it off!  That's a personal favorite of mine so it's good to not have too many leftovers!

So thankful for these times and these college kids!  Among them are many plans for the summer:  camp counseling, college recruiting, mission trips, continuing education, starting small businesses, and just plain hard work!

How do you entertain in your sphere of influence?

P.S.  It doesn't really matter what you serve - or the side dishes that go along with it!

Cook potatoes, carrots, and onion in chicken broth.  Drain off all but two cups of the liquid (reserve for later) and add blackeyed peas and frozen vegetables.  Add can of mushroom soup, salt and pepper.  Add in reserved liquid if needed.

In one 13x9 pan or 2 8x8 pans, lay pie crust down.  Layer chicken first, then a little salt and pepper, then vegetable mixture.  Top with another thin layer of pie crust.  Bake 35 minutes or until brown, at 350.

This is my family's personal favorite and I adapted the recipe from my husband's cousin in Arkansas years ago.  She always put blackeyed peas in hers and since I liked it,decided to do it that way too.  I used to boil a whole chicken and then let my husband debone it (yuck) but nowadays I just boil 4-5 chicken breasts, then shred in the mixer.


I went to a Pilates class Saturday and the teacher promised a little treat from the Franklin Method.

I had to google the Franklin Method and learned a little about it before the class and found this nice little stress relieving video.  Try it out!  I'm thinking we could all use this every day!

BOOKS I'VE READ IN ALL MY SPARE TIME...

I think "time" is definitely the theme here, when I look at the books I've been reading lately. 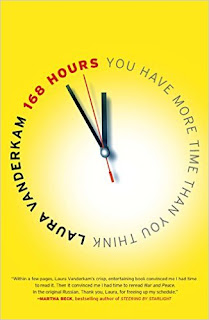 I picked this one up to figure out where my time is going and decided I really didn't want to take the time to do a daily time management log.  She has a lot of stories and tips, though, for helping you think about how you use your time.  Putting some of this into practice! 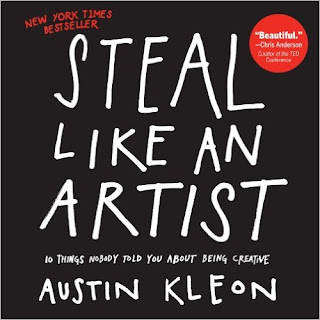 A little book and quick read. It has some general principles about life to help you think creatively. Most of it I've learned by experience(yes, I was thinking I could have written this one!). The title may sound illegal, but I assure you it's not.  We all get ideas from one another and that's as it should be.  I found myself thinking this is a great book for entrepreneurs and would be good for my son to read.


Graduates In Wonderland by Pan & Kapelke-Dale 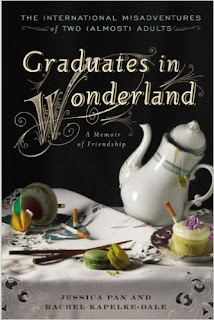 I literally picked this one up off the "New book" rack at the library.  It sounded good - the email messages and adventures of two friends their first two years after college graduation - but I wasn't impressed.  They basically partied in other countries and wondered about their future.

So I need iron, and I've been trying to eat more beef.  Problem is, I don't really care for it and The Hubs is not a fan of it for dinner.  Since his accident 10 years ago, it just doesn't agree with him.  So since I didn't care much for it anyway, we rarely ate much red meat (except for ground beef burgers and some casseroles) the last 10 years.  So no steak.  My boys think we've deprived them!

I've been on the hunt for recipes that mix beef and chicken.  That way both The Hubs and I can choose the meat we want out of it!  I made stir fry the other night, and put both beef and chicken in it.  Not sure why I haven't ever done this before, probably just simpler to use just one meat.  Here's an easy link I used that I really liked for Easy Stir-Fry Dinner.  I don't know why but I've never really been very confident when I made it in the past.  This recipe is explained well and I liked it and the leftovers! 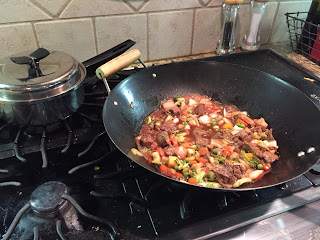 My son's fiancee' just sent this to my daughter.  I love this and think it's one of the best trends...so thoughtful! 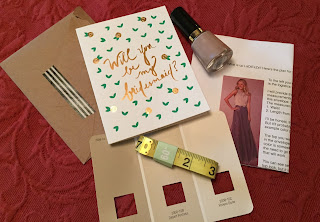 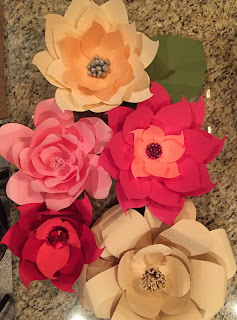 After seeing these and getting to take some home from HopeSpoken, I decided I wanted to try to make some myself.  After watching a few youtube tutorials, VOILA!

I've had a lot of fun making them and finding things to put in the middles.  I recently used them for my son's proposal party and now for a wedding shower. 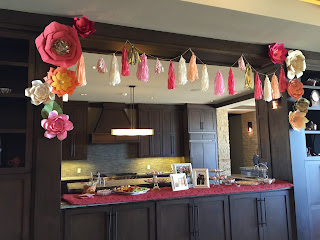 It might be hard to tell how large they are, but think dinner plate sized.  Here's the tutorial I watched if you're interested in making some.