WHAT ICE STORMS ARE GOOD FOR...

I've been tackling a major project lately.  Just the thing to do when the weather keeps you inside!  Approximately 25 years of double print pictures that I've been intending to sort and make into albums for a while are finally getting sorted into three piles, one per kid... 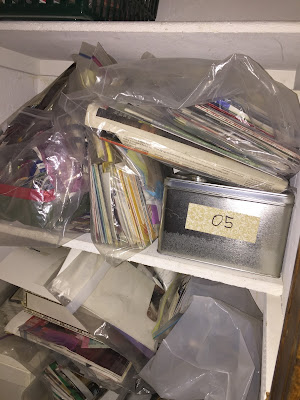 (this is just a small representation of the mess ;))

It's kind of crazy when you think about the change in photography/prints the last 20 years.  As I developed pictures, I got double prints to do the kid's albums LATER.  I made family and vacation albums for a long time, but I've switched to Shutterfly the last ten years.  But even though I'm not as crazy about scrapbooking as I once was, it would be a real shame to just toss all these memories.  I think hope my kids will appreciate them.

Do you have piles like mine?  I have a new plan to get me through them, and I'm really excited about it.  Maybe by putting it in print, it will encourage me to actually get it done.  It's been nagging at me for a while.  Like, years!  Here's my Declutter/Make Albums plan: 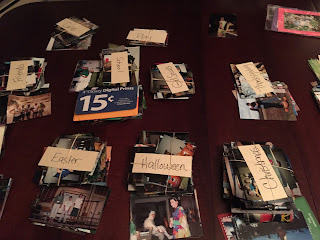 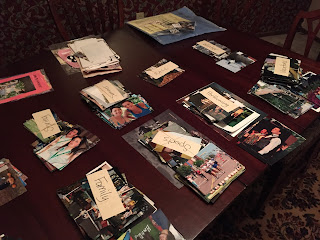 Anyway, I'm tackling it and hopefully each of my kids will wind up with an album of memories.  Blogging may take a back seat for a while...

HAPPY TO BE MOVING...

Recently I listened to a podcast that was about being happy for movement, that is, your ability to move.  It was a reminder that our body fat, weight, fitness level isn't something to obsess about BUT to be happy that your body works and can move!  I really liked the message and I think it's one many people need, especially women.

Just a few days after listening to that message my foot was bothering me and I was wracking my brain about what I could have done to have that pain.  Maybe I need to wear better shoes?  Not do pounding aerobic dances? Put my feet up a little more periodically? Probably all of the above.  I was feeling pretty sorry for myself...

Lo and behold, I got a huge reminder to be thankful for movement that next day when my sister called to tell me she was in the ER until 3:00 a.m. after breaking her foot the night before!  Her girls were good enough to go get her and take her but of course, the last 10 days I'm doing plenty to help her out (she was widowed several years ago).  She ended up having surgery and got 2 screws in her foot and had to cancel a trip to Germany to see one of her best friends.  She's on a scooter and having a hard time getting around right now. 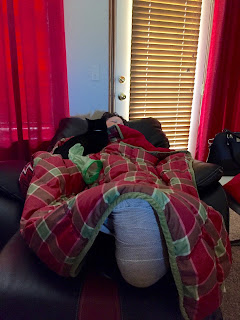 (The foot propped up and the cat sleeping on her!)
So my foot pain was temporary, but I was gently reminded that the 5 pounds I'm so worried about is no big deal!  I pray for my friends fighting cancer whose bodies are in distress, I pray for healing for my sister's foot too.  And I'm thankful to be moving without too much trouble. 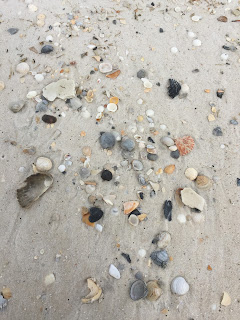 Seashells are kinda like people.
They look similar, but close up you see their differences.
Some are big, some are small.
Some white, some grey, orange, yellow, red, black.
Some have texture, some are smooth.
Some have stripes and patterns.
Some are scarred by unknown forces.
Most have chips on the edges after being beaten by the ocean waters.

Some are just broken pieces.

They’re beautiful and worth examining. 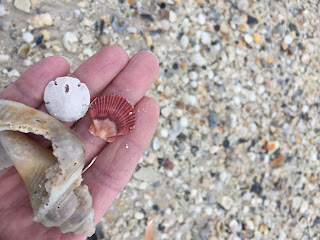 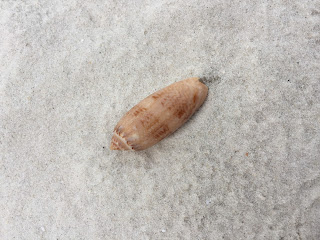 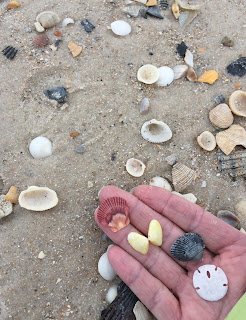 When we went to Alabama recently, I may have mentioned that we didn't look into many activities there ahead of time, which is pretty much against my nature.  We knew there were bike trails and a beach, and did bring our bikes and some things to do inside the condo, but other than that I didn't know much about what kind of attractions there were.

Once we got there and stopped in at their Welcome Center, we found out about some things to do and riding the ferry to Dauphin Island came up.  We could take our bikes on the ferry for a mere $5 and there were designated bike trails on the island too!  So we planned to do that on Saturday.  I checked the Dauphin Island calendar and saw that there was also going to be the "People's Parade," a Mardi Gras parade at 1 p.m.  We were told it was a "tame one." So I was excited to get to see my first!  Alabama claims that they celebrated Mardi Gras 15 years before Louisiana, just in case you were wondering!  But I think New Orleans took it to another level. 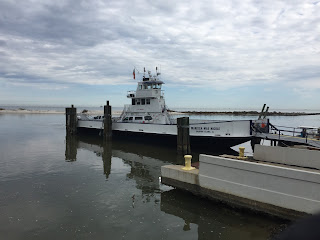 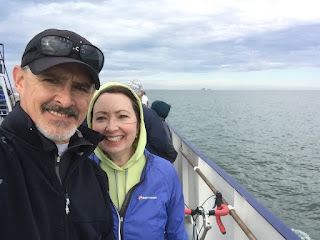 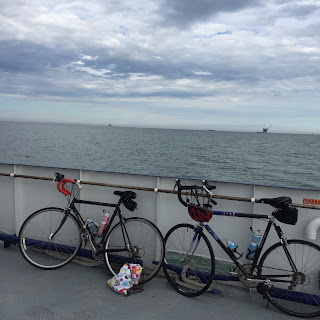 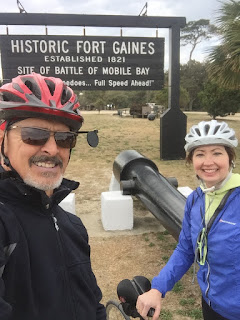 It was a nice sunny morning and we drove out to Fort Morgan where we caught the ferry.  It was fun, getting on there with all the cars!  It was a pretty 40 minute ride there and then we set off to explore.  We biked just a half-mile down to Fort Gaines where the Battle of Mobile Bay was fought and Union General Farragut said his famous line, "Damn the torpedoes, full speed ahead!"  We didn't pay to go into the fort but got to look around the outside of it. I can't imagine being on tiny Dauphin Island seeing all the ships come in to take over.

We biked through the town and noticed lots of people were already setting up tailgate parties and the parade was several hours away!  We also biked up to the big bridge that connects the island to Mobile.  We tried unsuccessfully to get lunch but some of the restaurants were closing early due to the parade.  Obviously the parade was a BIG deal.  We finally got a lead on one that was a good fish place and right on the water, too. 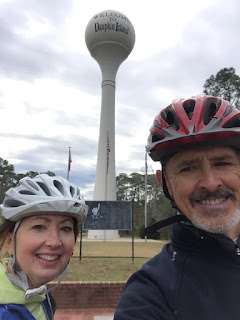 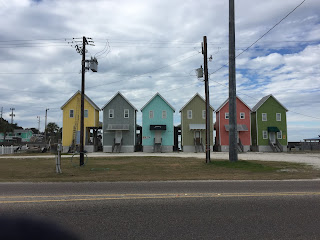 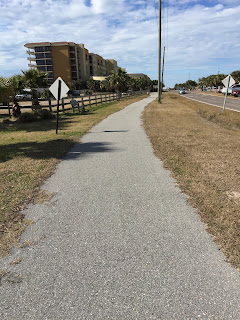 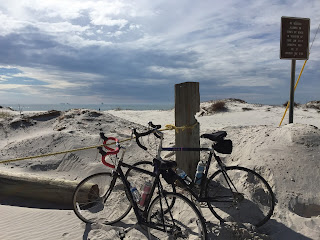 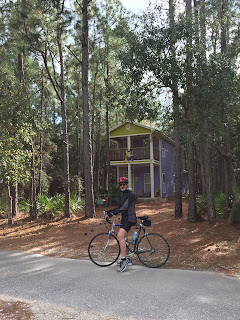 We biked back toward the ferry area which was also where the parade was to begin.  I have to say it was the funnest parade with the best music!  Multiple floats with little bands on them playing some great tunes.  We were thrown lots of mardi gras beads, moon pies, even little footballs and plastic cups with advertisements on them.  The little girl next to us had brought a large plastic storage box and would shout to everyone that passed by, and her bucket was filled with all of the above, plus stuffed animals, by the end of the parade.  Pretty crazy! 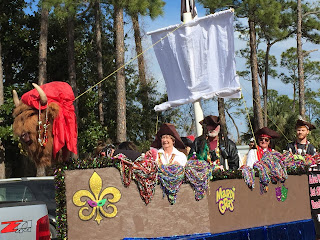 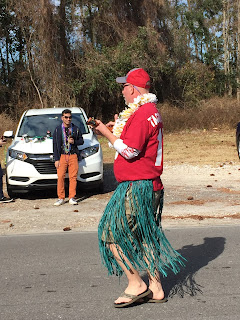 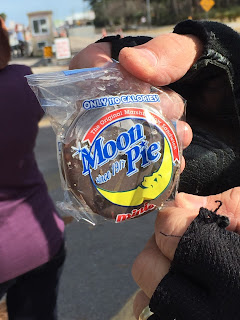 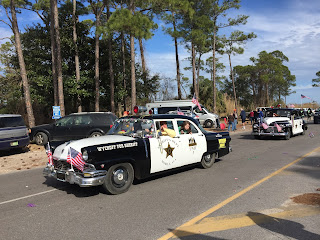 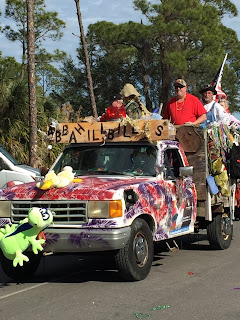 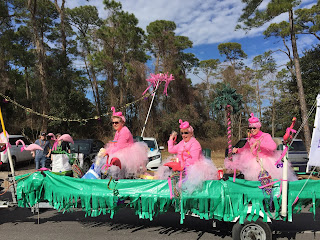 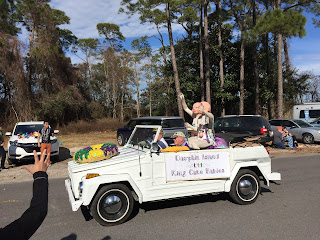 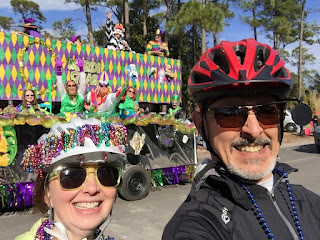 It was a great adventure day!