This is one of those "when I get around to it" kind of crafts.  But fun if you have the time.  I've always liked stamps and collected them since I was a kid.  I decorated this wooden box with stamps the other day.  For the craft challenged people, here's how it works: 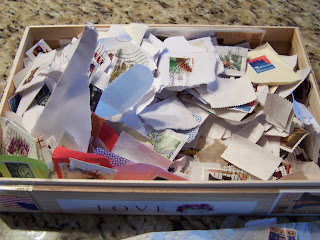 Get out your box of stamps ripped off of envelopes.  It does take a while to collect this many!  So start collecting today. 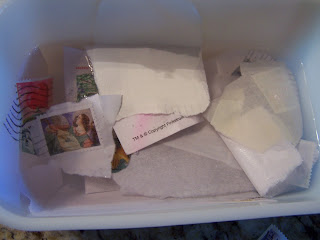 Soak in warm water so the stamps will peel off easily.  Sometimes I let them sit a while and come back to it later. 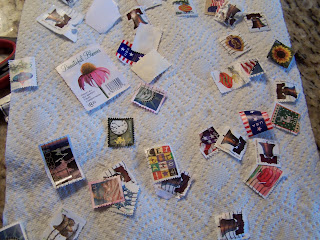 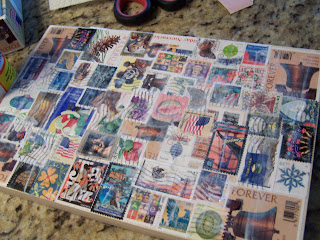 Put them on the box with mod podge.  I had saved a wooden box that tea bags had come in.  If you keep your eyes open, you'll find something similar.  Brush a little mod podge on the box, right where you place the stamp.  When it's all covered with stamps, do a light coating over the entire box.  I also used the big stickers from the stamp package on the corners of the box.  They still had adhesive on them so I just stuck them on directly. 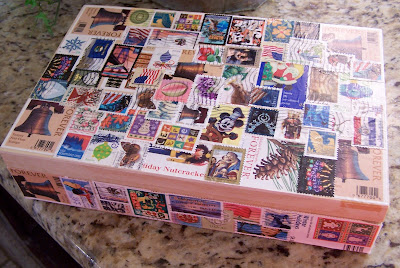 The finished project!  (Don't forget to sign it inside)  This is the second one I've done in probably 5-7 years.  What's cool to me is it's like a little chunk of history from the 2000's.  Hopefully my grandkids will appreciate it when I give it to them years from now!  Maybe I'll put a little cash in there too :)
Posted by Wa Wa Waughs at 6:10 AM

Ok, now I am kicking myself for not saving all the stamps from my Christmas cards. I love this!

That is WAY cool! You are such a crafty person! I mean that as a compliment! :) Blessings!

How cool! I didn't know you saved these stamps!

Yes very cool....I'm not sure I get enough with "real" stamps on it to do this, but maybe I'll start collecting!

Your quite the crafty person. I didn't know.