I have to admit that our bedroom is probably the last place I think about, as far as decor.  But after we got a new bathroom floor, I promptly moved on to our adjoining bedroom to declutter and do a little sprucing up!  Feng shui says your bedroom should be a place of calm (without a bunch of junk in it).  I believe that in theory!  But never really practiced it.  It became a dumping ground for old decor.  I am going for a simpler look and life, so I removed a chair, some throw pillows laying around and lots of knick-knacks.  Then there was this really large, faded picture on the mantle.  I decided to see what I could do to update it. 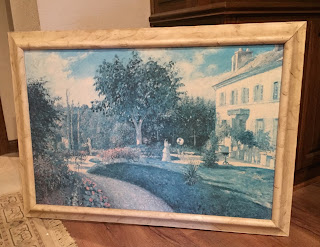 I decided to make it into a burlap sign.  I popped the canvas out of the frame and stapled a piece of burlap onto it.  Then I found a saying I liked.  I had to read a few things on Pinterest since it had been so long since I painted letters on burlap, but I ended up printing the letters off from a large font on the computer, then just placing them underneath the burlap where I could see them slightly.  Then just tried to paint with a steady hand.  It's not perfect, but it's something fresh for our bedroom! 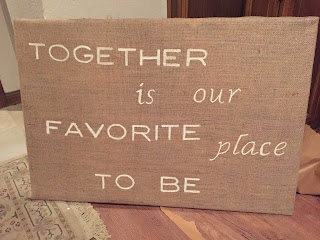 It really bugs me when i correct something and it still doesn't correct! So ignore the centered copy at the beginning vs. the copy on the bottom. Couldn't get it aligned the way it should be but I'm not all about perfection anymore! Have a good week and be adaptable. :)