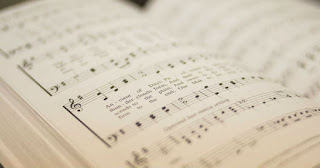 We recently had a Wednesday night class series at church called "Then Sings My Soul."  It was such a joy for me to get to teach a couple of the lessons!  This was a class for women, and we highlighted hymns by women authors for half the hour, then sang other songs ladies chose out of the songbook for the rest of the time.  It turned out to be quite interesting and lots of fun!  I really looked forward to every Wednesday night.

Most of the women authors we highlighted were born in the 19th century.  Some of them were poor, some were privileged.  Some were disabled, some were physically strong.  Some were from Europe, some lived here in the US.  Some were married, some were not.  It was really interesting to learn more about these women and how their songs came to be.  It gave me more insight and feeling for the words they wrote and their relationship with Jesus.

For instance, Anna Barbauld wrote Again the Lord of Light and Life, and she was well known in England for many writings during her lifetime.  Her song is about the resurrection and would be a great one to be sung on Easter.  But her life was also very hard in that her husband had a mental breakdown and she carried on despite their difficulties.  Jennie Wilson wrote Will Your Anchor Hold and this bolstering song has gone beyond the hymnal and is the official song of the Boys Brigade (like the Boy Scouts) and of the Dollar Academy in Scotland.  One of my favorites that I researched is author of Hold To God's Unchanging Hand.  She was in a wheelchair from the age of four but wrote so many songs of joy and encouragement.

I'm thankful for the ability to read and research.  I'm thankful for classes and teachers.  Often times, the teacher learns more than anyone else in the class, so consider being a teacher when asked!  I think about the limitations of people a few centuries ago, like some of these women, and count my blessings.  I have modern conveniences that they did not have.  There are still difficulties but we all have one thing in common:  the salvation that comes from Jesus Christ and the joy we have when we sing about it!