JUST ALONG FOR THE RIDE...

We enjoyed a Grand Canyon hike about this time last year with a group of people from church.  It was awesome, but I didn't want to do the 17 miles-in-a-day-thing again this year!  The Hubs did, however!  This was going to be slightly different - actually a 26 miles-in-a-day-hike - and that put me out of the ball game.  I was okay with that!

Then, someone with a knee injury backed out of the trip, and with all the planning and travel reservations, they asked me to fill the spot.  I went totally unprepared and didn't know what was in store!  I was just along for the ride.  Little did I know I was going to do one of the hardest things I had ever done physically!

It was a really different trip this year, traveling to three parks in four days.  We hiked in Valley of Fire State Park in Nevada, Zion National Park in Utah, and the Grand Canyon National Park in Arizona.  The surprise for me was doing what I saw later was dubbed "extreme hiking" in Zion!  Most of the group didn't want to do the Angels Landing hike, a 5.4 mile hike with steep trails and part rock scrambling with some chain climbing due to sheer drop offs.  They were saving up their energy for the Grand Canyon hike the next day.  But several did, and I wanted to do it since I wasn't going to do the GC.

I hadn't looked at any information on Angels Landing, but I knew one of our leader's daughters had done it, so I figured if she could, I could.  I found out later that 6 people had died on this particular hike/climb, but none after 2010 when they made some improvements and installed more chains to hang onto up to the top!

Anyway, long story short, I was huffing and puffing on the steep trail, my quads were burning, even before the hard stuff.  So here you are, already tired, then you start rock scrambling and walking up steep rock faces, holding onto a chain, anchored into the rock.  I was glad I brought gloves to wear because of the cold chains.   It was crazy and fun! My friend coached me some, telling me to stay to the inside of the rock wall if someone tried to pass me.  She admonished me for getting out my camera a few too many times, too!

So I didn't get a ton of shots due to the nature of it, but you can google "Zion Angels Landing" and see for yourself what it is like!  Here's a few from the first two days of the trip: 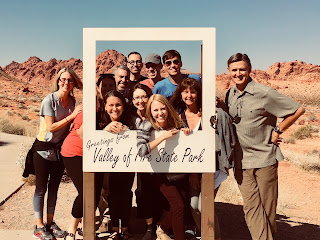 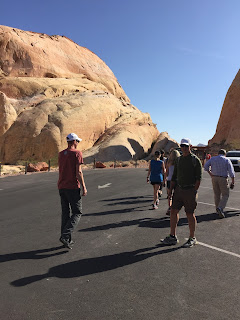 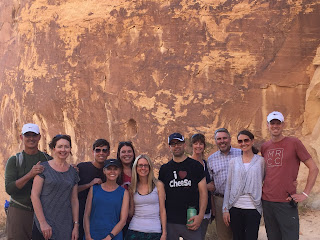 In VOF we went on two short hikes, seeing a slot canyon and lots of petroglyphs! 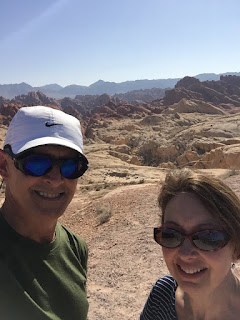 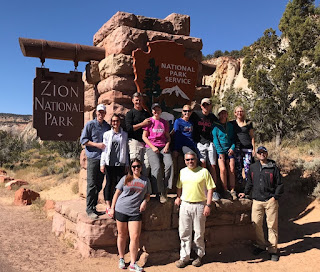 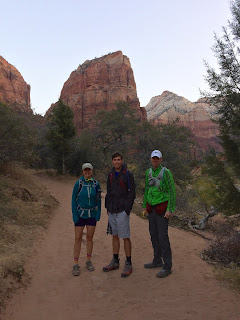 Angels Landing in the back ground - we had no idea what was in store for us! 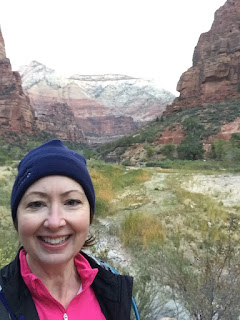 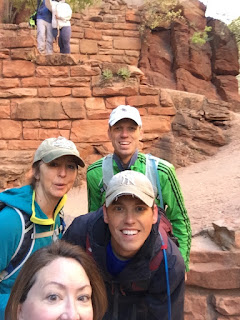 Getting ready to go up Walter's Wiggles - a man made walkway because the trail kept getting washed out in this canyon when it rained. 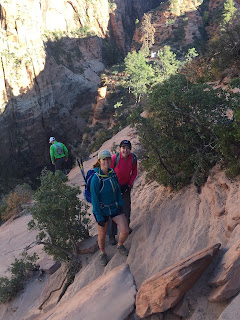 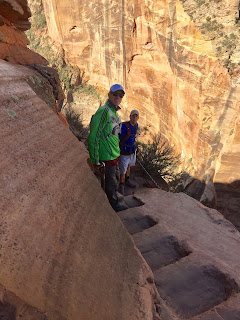 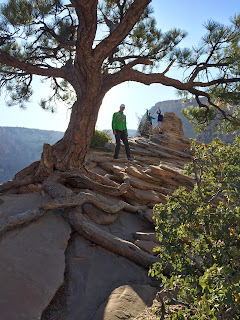 Finally made it up on top! 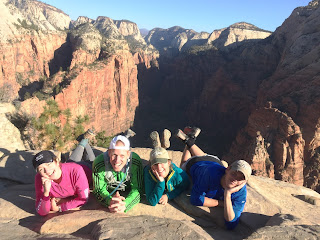 Being goofy! We had just taken a photo of four college girls like this and they were giggling and saying they "were thirteen," so we just had to do it too! 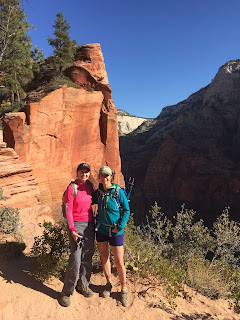 Me and my trip planner/mountain climber friend!