I was given this topic a few months back to prepare a lesson for our women's class.  The summer went a little different than planned and so I was starting to panic when I didn't have it completed in August and I was to present early September! 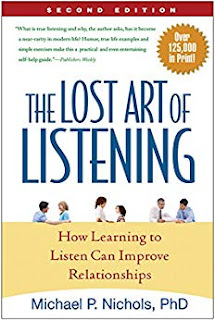 Anyway, it finally came together and I learned so much!  What I learned was mostly introspective on my part as far as being a listener, and a little more on how to handle situations better.  One of my favorite resources was this book.  It's part psychology and part listening tips.

Over the last couple of months I began to notice people's conversation skills, how they listen, and examples of good listeners.  When we visited the Jimmy Carter Presidential Museum and Library in Atlanta, Georgia, there was a great example of listening that stood out to me.  I used it in my talk:


Last Saturday, I visited the Jimmy Carter presidential museum in Atlanta.  I was in elementary school when he was elected, so all I really remembered about President Carter was that he was a peanut farmer and had a daughter close to my age.  It was very interesting to me as an adult to look at his life, and see how his faith showed through his presidency.  One display highlighted the Peace talks that he set up in 1978 at Camp David, Maryland.  This was a time when good listening led to peace for two countries.
President Carter had established a friendly relationship with both Egyptian president Anwar Sadat and Israeli Prime Minister Menachem Begin.  Despite their initial efforts for peace, the two countries had a long history of difficulty with each other.  First Lady Rosalynn Carter suggested to her husband that inviting them to Camp David, where privacy might provide the setting for a breakthrough.  Both men accepted, but with their personality differences, it was a hard task for President Carter to negotiate.  One was very concerned with details, whereas the other left the details to his advisors.  Carter had to listen well as he drafted and re-drafted peace agreements.  Do you know how long these peace talks lasted?  13 DAYS!  After the first 3 days, they reached an impasse.  Carter thought he might have a fistfight on his hands.  He then went back and forth from Begins cabin, then to Sadats cabin with concessions.  At one point Sadat decided to leave and ordered for his helicopter. Carter convinced him to stay.  Then Begin decided to leave but before doing so he asked Carter to autograph pictures taken of the three men for his eight grandchildren.  Unbeknownst to him, Carter’s secretary had found out the names of each grandchild.  Carter signed each photo “with love and best wishes to ______” and put each individual name.  When they were presented to Begin and he saw the names of each child written on each photo, he got tears in his eyes and so did Carter.  He said, “Why don’t we try one more time?”
Rosalyn confirmed this story and she believed the pictures touched Begin’s heart as he thought about his grandchildren living in peace.  It led to the three men being able to come up with a peace agreement between the two countries, and the Peace Treaty between Egypt and Israel stands to this day.  As Carter addressed Congress about it later, he quoted from Jesus’s Sermon on the mount, ‘Blessed are the peacemakers, for they shall be called children of God.”  Jimmy Carter showed excellent listening and negotiating skills and great perseverance during that time.

The bottom line of the lesson was LISTENING IS LOVING.  💜

Don't you love it when you dive into a topic and enjoy learning and sharing about it?

I loved hearing this story when you spoke! You did a great job starting out our series. Hopefully we can all become better listeners and peacemakers!

I wish I could have heard you speak on this. I linked to your post on my blog because I've had some interesting experiences lately that relate. Thank you for writing about this and reminding us of this. I'll look at this book.

Appreciate your discipline in regularly writing about what is going on in your life and with your family. Thanks for sharing as this all is an encouragement.

If Mark or anyone else would like to hear Robin's lesson from 9/4/19, it's online, along with the rest of our Wed. Night fall speaker series lessons from Peace in an Angry World. https://www.mrcc.org/ministries/womens/#wednesdays

Lori, today you are my hero. Thanks for sharing this. I'll go find it.